Hajj- Journey of a Lifetime

It’s hard to believe we have only been here for 48 hours. It feels like we have done so much in that time. I think the walking through the crowds back and forth for each prayer takes it out of you. Our hotel is very close to the Prophets mosque but the mosque itself is so big, so once your inside you can keep walking for another few minutes!

We prayed the dawn prayer on the roof and watched the sunrise. The different colours of the sky were breathtaking, it seems like i take the same photo every year but you can never get sick of it! 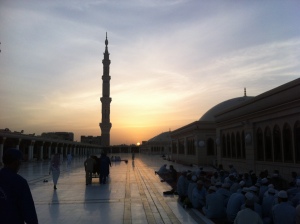 Given today was Friday, it meant that we had ‘Juma’ or what is know as the friday prayer. The friday prayer in congregation is compulsory upon Men but optional for Women. It involves listening to a sermon as well as praying together in congregation. As always the mosque was jam packed for Friday prayer as you have all the locals as well as pilgrims present. I advised members of the group to go early at least a couple of hours before in order to secure a place to sit inside out of the heat and given this was their only Friday Prayer in Madinah to make the most of it!

One of the things that got me thinking was when we stood for prayer, how is it that approximately 600,000 people can form rows of straight lines within 30 seconds? Amazing!

In the afternoon we had a lesson from Sheikh Kamal who is Hurstville local that has been studying here in Madinah for the past 20 years. Every year we here that he is coming back now, he is coming back now but he just never seems to come! He completed his PHD last year.

In the lesson we learnt about the importance of sincerity in all our actions, in particular that of Hajj. However we also learnt about how that for a Woman, Hajj is the biggest struggle or form of Jihad that they can perform in their life time. Having been blessed with the ability to perform Hajj for the last 3 years I can understand why this is the case as it can be very difficult for the women. Every year that i come i always see that the women of the group have so much hunger to make the most of the trip and form a special bond between all of themselves so quickly. This year is no different. They strive and compete and encourage each other to do good. I am proud to have them as sisters in faith. 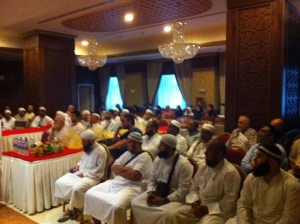 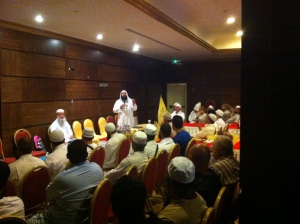 The group listening to the lesson given by Sheikh Kamal.

During the lesson we learnt about the amazing story of Asma’ bint `Umays – the wife of Abu Bakr (the truthful one) the greatest companion of the beloved Prophet peace be upon him.  Asma was full term in her pregnancy i.e 9 months pregnant and she set out to do Hajj and while doing so gave birth to a son only 10kms or so into their journey. She did not let this stop her and had a bath and continued on via camel in the desert in the Arabian sun to travel 500km to Makkah all whilst taking care of the newborn. She was so eager and keen to perform Hajj with the Prophet peace be upon him and what a choice it was as the Prophet only performed Hajj once as he died before the Hajj next year! An amazing story of an amazing woman! Even today in air conditioned buses, 5 star hotels i don’t think there would be many if any women who would do the same thing!

After hearing this story i had to reflect back to when i came in 2010 with my wife who was 4 months pregnant. I didn’t really pay too much attention at the time nor ever since but I have to say that it was an amazing effort on her behalf to complete Hajj whilst bearing my son 4 months pregnant. I know that my wife is reading this, so I am really proud of you for what you did in 2010 and you have tremendous strength and are my rock!  Women in general, they always put us men to shame!

I pray that all the sisters from around the world who have come to perform their biggest Jihad of Hajj have a safe, healthy and accepted pilgrimage.

This entry was posted on September 30, 2013 by shanrana in Journey of a Lifetime- Hajj the 5th Pillar of Islam.